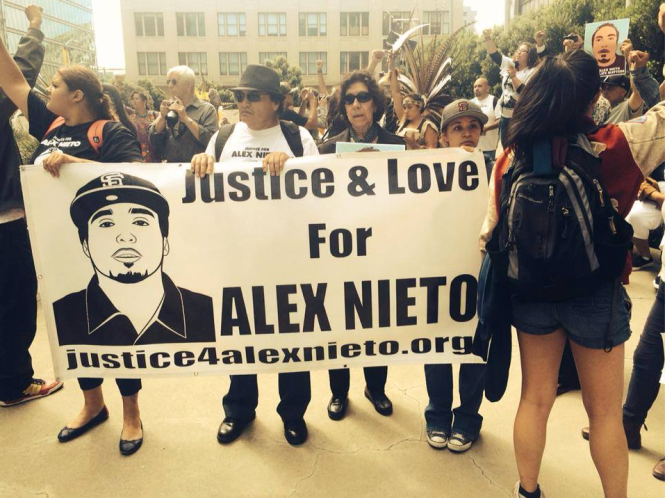 In Lowrider Lawyers: Putting a City on Trial, the barrio community rises with creativity and amor for Alex Nieto, scholarship student security guard and beloved son, who was unlawfully killed by 48 bullets fired from the San Francisco Police Department on March 21, 2014 on top of Bernal Heights Mountain.

When the Homies discover that Alex, who had never even been arrested in his entire life, has been unjustly executed, they request that the heavy hitters handle the case. Caravanning with other fine rides, the Lowrider Lawyers lowride in a wine-colored 1966 Chevy Impala Convertible to the colonial courthouse, where indigenous danzantes drum out and stomp over evil spirits, and summon the truth into the justice system. A jury of peers, cholo homeboys and homegirls, listen intently to the evidence presented.

Using legal articulation, the Lowrider Lawyers begin with a clear, concise opening statement. They then move to critically examining the witness who actually saw the killing and contradicts the police narrative, a dog owner whose wolf-like dog attacked Alex, and the person, who without reasonable cause, called the police on Alex. The courthouse is then magically transformed into the barrio, where the last Lowrider Lawyer interrogates the police officer who killed Alex Nieto. Balmy Alley’s gentrification mural becomes the vibrant backdrop, and the Homies painted on the walls serve as the jury. Substantive answers from witnesses and the police are based on the actual San Francisco District Attorney’s Report, deposition testimony, and other true accounts.

We have received extremely positive news regarding the Alex Nieto case!

Today a federal district judge denied San Francisco’s attempt to dismiss the case by way of summary judgment. The city attempted to obfuscate and distort the evidence and facts of this case, and the judge saw through their manipulation and flat out denied their elaborate motion for dismissal.

The judge decided that we deserve a full-blown trial! Trial date: March 2016.

There was no plausible reason for Alex Nieto to have been shot at 59 times by the SFPD. In order to update the community about new details that have emerged and celebrate this victory, we invite you to join us for a press conference to be held this coming Monday, November 9 at 3:00 p.m. in front of the federal building at 450 Golden Gate Avenue, San Francisco, CA 94102.

Please join the event page below and invite your friends as well.
Amor and victory for Alex Nieto!

Today Elvira & Refugio will render depositions (i.e. testimony) about themselves, their son, and incidents related to the unlawful killing of their son. Depositions can be brutally exhausting even when the City Attorney is not trying to tear you down and tear into you. They will be accompanied by their attorney Adante Pointer.

Each of Alex’s parents can expect to be questioned anywhere from 2-4 hours or who knows how long. They’ll be there from 9am into the afternoon. Please keep them in your thoughts! They are warriors. They are strong. But we can still accompany them today with our good thoughts. I wish them calm.

While we’re at it please send your best to Adante Pointer and the legal team at the Law Offices of John Burris who are representing the Nietos and are there to shield them from any legal trickery.

UPDATE: Elvira and Refugio were questioned from 9am to 6pm that day with minimal breaks. They told a supporter that since Alex’s death, the deposition process has been the hardest day of their lives. The process which families such as the Nieto’s must undergo to get facts is a process of constant retraumatization. Thank you for your good thoughts!